In my humble opinion, inflation, and its counterpart, deflation, are the most important topics in economics.

Inflation is something that affects every single one of us because it affects the level of prices in the economy. Inflation is literally an intricate part of our day to day life.

In fact, inflation is so important that it even determines the actions of most Central Banks around the globe.

Central Banks, determine their policy according to an inflation target. More specifically, they adjust the interest rate by increasing/decreasing money supply to achieve an inflation “target” of 2% per annum. I discussed the working of central banks in greater detail here, if you are interested. 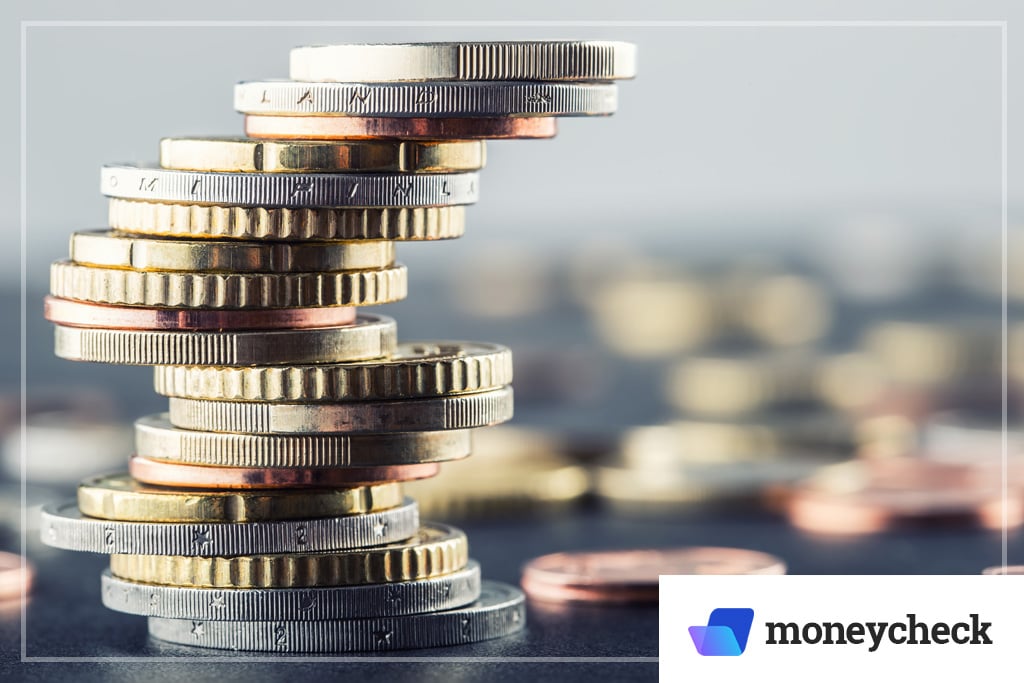 But let’s start from the beginning.

Inflation is often described in economics textbooks and classrooms as “ a sustained increase in the price level”.

I take umbrage at this description.

The change in prices is, at least in my opinion, nothing but a symptom of what actually constitutes inflation. I define inflation/deflation as a change in the value of the currency. This, in turn, is what leads to prices increasing or decreasing.

Describing inflation as “increases in price” would be like saying that the common cold is when you have a temperature and sneeze a lot.

What it is, actually, is a virus inside your body which causes that reaction. The fever and sneezing are the symptoms, and so is the increases in price.

The way monetary inflation works is quite simple really. If you increase the amount of money available without increasing the amount of goods i.e things to spend the money on, the prices of those things will eventually increase.

A Practical Example of Inflation

If tomorrow all the banks in the world got together and decided to double the balance in everyone’s bank account, would we be better off?

You’d have to be quite naive to actually believe that. If everyone has twice as much money, no one is better off.

Maybe in the beginning, when not everyone is aware of this doubling of money, you could get away with quickly spending your money and getting double the goods you could have got before.

But as people realize what has happened, and as more people attempt to transfer their newly found wealth into goods an imbalance will occur.

At the normal prices, there would be a surplus of demand. Lot’s of people trying to buy things and no immediate extra supply since the number of goods can’t double overnight.

If double the money is chasing the same amount of goods as before, each good will be inherently worth twice what it was before. So prices will eventually double. 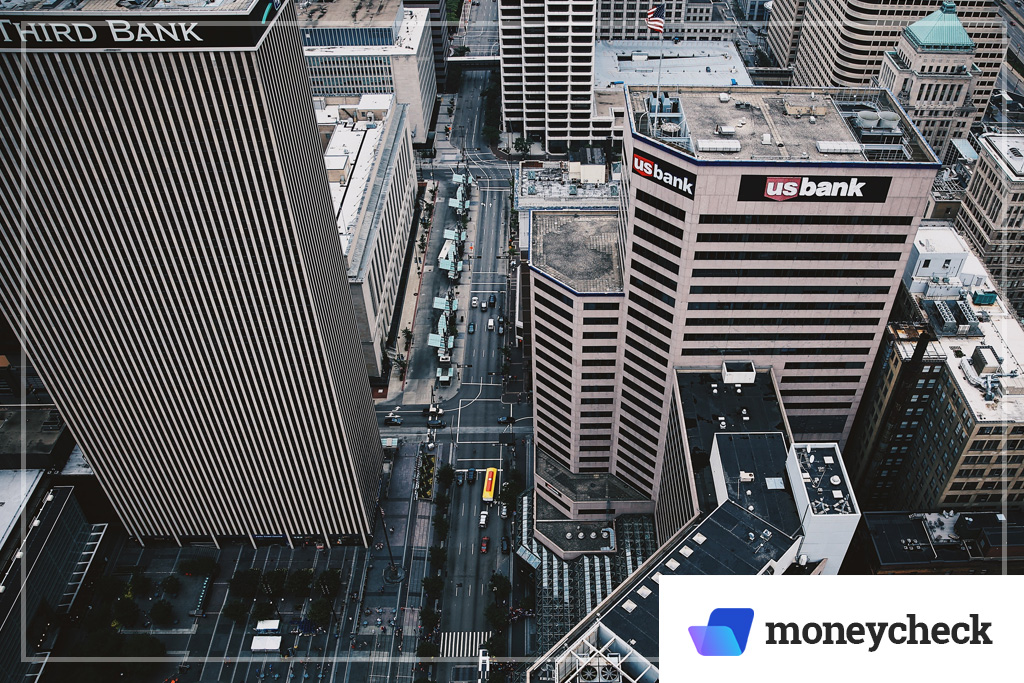 Read: How do Banks Work? A Complete Beginner’s Guide

So, monetary inflation leads to price inflation. But as I said, I think economists often overlook this causal relationship when they state simply that inflation is an increase in prices.

The fact of the matter is, prices can change for various reasons.

In the short-run, changes in supply and demand will make prices fluctuate unpredictably.

In the long-run, arguably, technology and advancement will bring about price deflation.

Another phenomenon that can affect prices is bubbles. These are surges in demand. In recent years, like with the 2008 housing bubble, this was exacerbated by excessive debt.

In a way, excessive debt acts like an increase in money supply, like in our practise example.

So the European Central Bank, the Bank of England and the Federal Reserve all have what they call an inflation target.

Ever since the 1970s, mainstream economics has favored inflation over deflation. The idea is that a little inflation is tolerable to avoid the threat of deflation.

This, in my opinion, somewhat irrational fear of deflation comes from the “lessons” learned from The Great Depression.

In 1929, the U.S. stock market crashed as it had never crashed before.

After this event, the U.S and most of the world would experience a decade-long economic depression.

The causes of this downturn can be attributed to many factors.

All of these elements contributed to a decade-long economic downturn. Is deflation to blame for any of it? Let’s have a look. 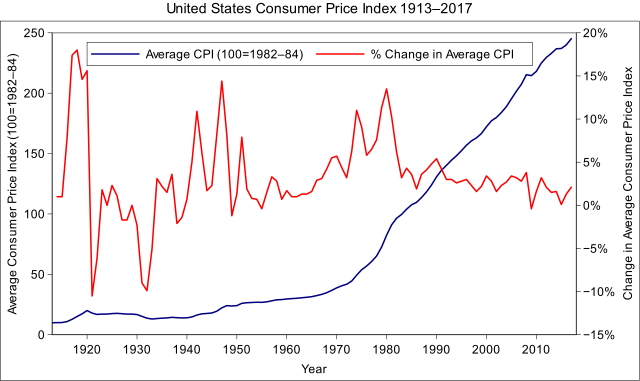 This is a chart of the U.S CPI for the period 1920-2010. The blue line shows the actual average CPI, while the red line shows the percentage change in the CPI.

Was there Deflation During the 1930s?

There’s a small slump in the CPI during the first couple years of the 30s. We can see with the percentage change, that there was, in fact, a big change in the movement in prices. (year to year)

Overall, it hardly seems significant. There was only short and small spell of deflation.

The more interesting thing is this. Look at what happened in 1920. The sharp downwards red-line indicates there was a much bigger and sharper deflation at the beginning of the 1920s. Interestingly, this era of prosperity would go down in history as the roaring twenties.

There are at least two schools of thought when it comes to deflation/inflation.

Most mainstream economists nowadays fear deflation. They see it as something that should be avoided by means of government intervention.

Why do they think deflation is bad?

There are a few reasons, but the story basically goes like this:

Think of it as a circle of doom, sending the economy spiraling down into oblivion.

The other main reason is that deflation makes it harder to pay off debt, just like inflation actually reduces the burden of debt.

If I have to pay off debt but the goods and services now have a lower nominal price it’s going to be harder for me to repay the debt I acquired when I thought prices were going to be higher.

On the other hand, a small subset of economists views deflation more like a necessary evil. They think of deflation as a period of correction. If the stock market is overvalued and people and businesses are too in debt then it is normal for prices to go down.

If there are widespread defaults, again, we can see this as a contraction in the money available, since there is debt being destroyed. Prices will have to adjust to this new reality.

Proof of this theory could be found in what happened during the 1919-1920 period. The U.S: economy went through a bad deflation and recession. But after this quick and swift correction, they enjoyed a decade of prosperity.

The more popular alternative seems to be to try and avoid deflation by kicking the can down the road. Pumping money into the economy in the way of cheap credit to maintain high stock market valuations, or high real estate prices, or to help businesses and companies get more debt and continue the “virtuous” cycle of consumption. 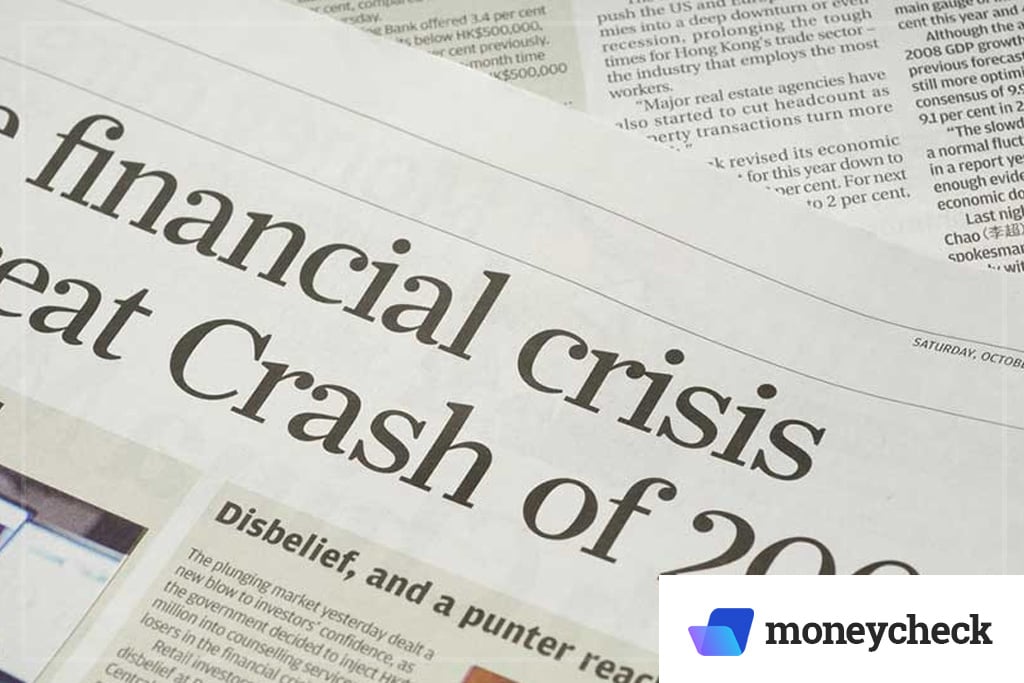 What is the “Right” Level of Inflation?

At the end of the day, this is the question we have to answer.

I’m of the opinion that monetary inflation should pretty much be zero. The value of the currency should remain stable as much as possible, as it is used to measure value when exchanging goods.

What happens to price inflation, is another matter. As I said, there are many factors at any one point affecting prices in the short-term.

In the long-term, I believe we would all benefit from deflation. Who doesn’t like lower prices?

This would happen as technology and more efficient production methods make things less costly to produce.

The alternative is inflation, which we must understand means a loss in purchasing power. Inflation makes things more expensive, and it penalizes saving, which is, of course, something I always recommend doing as this is the first step to actually investing your money and working towards your financial independence. 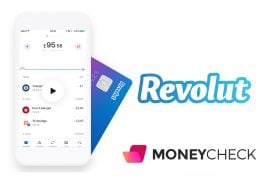 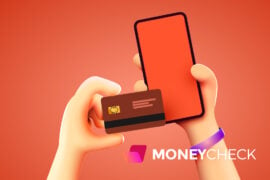 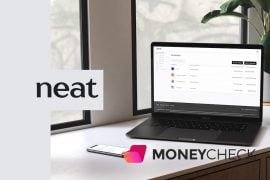